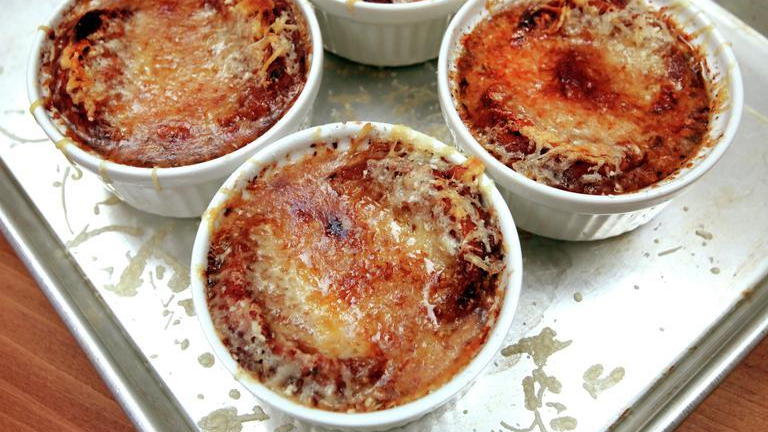 Uncover the pot and stir in the sugar and salt, then sprinkle generously with freshly ground black pepper, about one tablespoon. Increase heat to medium or medium-low and cook for about 30 minutes, stirring often, until the onions turn a rich, golden brown, but not black (caramelized).

Meanwhile, in a smaller pot, bring the beef and chicken stock to a boil, then reduce to the lowest heat setting until ready to use.

Once the onions have achieved caramelization, reduce heat to low and stir in the flour until well mixed; if the flour appears to clump, stir in a pat of butter until it is fully absorbed into the onions. Cook over low heat for about one minute, stirring continually, to lightly brown the flour.

Remove pot from burner, pour in one cup of the hot broth mixture and whisk to incorporate the flour. Add the remaining broth, white wine, sherry and thyme, and bring to a simmer over medium heat. Reduce heat to low and simmer gently for about 45 minutes. Taste and stir in salt and pepper as desired, starting with ½ teaspoon of each.

Serve immediately as is or with the more decadent Gratinée topping.

To store: Cool completely, then cover and refrigerate for up to one week.

To Freeze: Cool soup completely. Pour into a large plastic freezer bag, place bag in a medium bowl and freeze (once frozen, bowl can be removed). To thaw, simply place the bag in a large saucepan filled with water and heat over medium-low heat until thawed. Pour soup into a sauce pot and bring to a boil over medium heat.

Brush each slice of bread with oil or butter. Place the bread on a baking sheet, in a single layer, and bake until the tops are golden brown, about 8 to 10 minutes. Remove from oven and set aside until ready to use.

Place your serving dishes on a baking sheet. Pour the hot soup into individual, oven-safe serving bowls (or one large casserole dish), and add a splash of cognac to each adult serving, if desired (add the entire ¼ cup if serving in one dish).

Fill the top of each dish with the crostini – this may require using 2 per dish if needed. Generously sprinkle the grated cheese over the top, covering the crostini entirely.

Change oven to the broiler setting. Place the baking sheet in the oven and broil, watching closely so the bread doesn’t burn, until the cheese is golden brown and fully melted, and has started to bubble on the top.